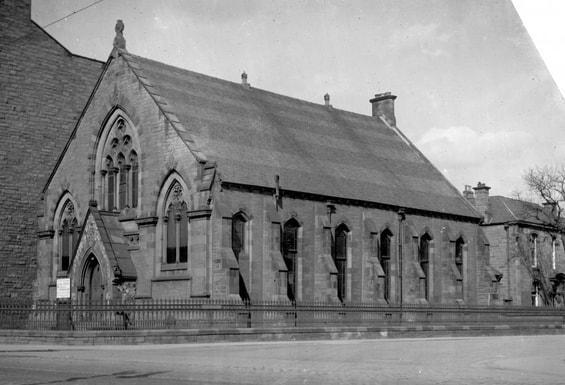 ¨The Old Athenaeum¨ ...Our church home from 1887 to 1928.
Morningside Congregational Church was established in November 1887 with only 25 members. The present church building dates from 1929. The church was started in the growing suburb of Morningside by three young men: Joseph Burns, Frank Sonley Cownie, and Andrew Melrose. They leafleted the area to drum up interest and hired the Athenaeum, a lecture hall and library by the Morningside Athenaeum Club, for their meetings.

The church building, originally built for North Morningside United Presbyterian Church in 1863, stood at the corner of Chamberlain Road and Morningside Road on the present site.
The United Presbyterians quickly outgrew the church, so they sold it to the Morningside Athenaeum Club and began building a much larger church across the road which is now the Eric Liddell Centre.

The Congregational fellowship was formally constituted as a church in December 1887. The congregation purchased the building in 1890. However, size almost immediately became a problem. Plans to expand the building were put on hold in 1914 due to the Great War.

A proud heritage of service and leadership.

¨A tremendous asset to the city of Edinburgh¨

​By 1926, membership had grown to over 500. The building was too small, even with weekday services and several on a Sunday.

Bold plans were drafted to demolish the ‘old Atheneum’ and build our present church building, complete with teaching rooms and caretaker’s flat. Finally, the larger Art Deco-Romaneque style church that we have today was constructed between 1926 and 1927, designed by architect James McLachlan, FRIBA. The foundation stone was laid in 1928 and the opening service of dedication was held in October 1929. The overall building project, overseen by the congregation´s minister Rev. Roderick Glyn Davies, concluded in November 1929 at an eventual cost of £24,000 (including a new manse).

The Scotsman reported that Lord Provost Sir Louis Stewart Gumley LLD (1870 –1941) commended the new church as ¨a tremendous asset to the city of Edinburgh.¨ ¨People in Scotland,´ he said, ‘were proud of the Congregational churches. They floated in a sea of Presbyterianism which was a friendly supporting medium in some ways.¨ Yet he thought the Congregationalists, ¨were right to preserve their own outlook… as it would be a distinct loss to Scotland if they were to amalgamate in one homogeneous Church.¨ (15.3.1937)